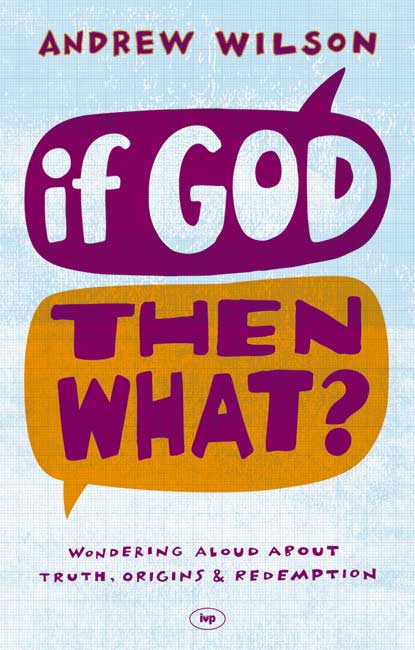 I live in the same part of South West London as a prominent food critic. As soon as somewhere new opens locally he reviews it, which has led to some great culinary discoveries! So on the one hand it’s a blessing. On the other, it’s a curse; since no sooner has he reviewed it and the word is out, than it becomes almost impossible to get a reservation.

So a part of me – the deeply selfish part, which prioritises my own culinary escapades above those of my fellow man – wishes he’d not review them. Or maybe he could, but just tell me. Or perhaps just give me a fortnight’s head start on the rest of the nation…

Very occasionally I feel the same way about books. I recognise that they deserve to be widely known about; everyone should have a copy. But the selfish part just wants to keep them as my little secret, so I can devour, apply (and re-use!?) the material before the rest of the world gets a chance. Some books are just too good to review.

If God, Then What?: Wondering aloud about truth, origins and redemption is a witty, creative, compelling and provocative book in which Andrew ‘wonders aloud’ about ten key questions, addressing issues like fundamentalism, the nature of knowledge, the origins of the universe, the possibility of the miraculous and suffering. His answers are never heavy-handed or dogmatic, but rather he leads you on a journey with each chapter; weaving together insights from personal experience (and it appears he’s had some pretty odd experiences!), popular culture, history and philosophy.

Stylistically, think Tim Keller’s The Reason for God written by a British version of Donald Miller. (Incidentally, both Keller and Miller also make my ‘too good to review’ category). Too often apologetics books produce stock answers to questions that nobody’s really asking! Not so here. Andrew tackles ten hugely important questions, which anyone and everyone regardless of their faith-position could and should be asking. His narrative style means that rather than being presented with a honed, well-packaged, but slightly soulless, off-pat selection of answers, you genuinely feel like you’re somehow eavesdropping on the inner workings of his brain, following a logical train of thought from beginning to end. As such, it feels very authentic and engages both the heart and the mind.

Andrew has a remarkable ability to break down complex arguments into bite-sized, accessible chunks, which is expertly demonstrated in If God, Then What? A personal highlight was the seventh chapter, in which Andrew paints a beautiful picture of what a snippet of the world might look like in the New Creation.

If you are a Christian looking for a more robust understanding of the reasonableness of your faith, or a fresh way of articulating big and difficult concepts, or a book you can give to friends without cringing, then this is for you. And if you are not a believer but would like to read a book that will give you cause to think about life, the universe and everything perhaps for the first time, I would highly recommend this as a great place to start.

Writer, preacher, thinker, joker, gooner, baker, follower of the way. Husband of one wife, father of one child, author of no books. Pastor at Christ Church London. View all posts by Liam Thatcher