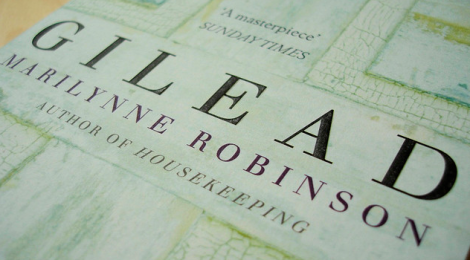 I told you last night that I might be gone sometime, and you said, Where, and I said, To be with the Good Lord, and you said, Why, and I said, Because I’m old, and you said, I don’t think you’re old. And you put your hand in my hand and you said, You aren’t very old, as if that settled it […] You reached up and put your fingers on my lips and gave me that look I never in my life saw on any other face besides your mother’s. It’s a kind of furious pride, very passionate and stern. I’m always surprised to find my eyebrows unsinged after I’ve suffered one of those looks. I will miss them.

Gilead is one of those rare, rare novels where from page one you already feel you know its narrator intimately. I have no idea how an author can sum up a person so beautifully in just a few paragraphs, but within a short period after beginning this novel, I felt I knew so much about Revd. John Ames. I could hear his voice; imagine his frame; picture him sitting on his chair on the porch, or in his study. If you had asked me before I’d reached a dozen pages I feel I could have described his life, his face and his idiosyncrasies. It’s a masterful writer who can achieve that.

Marilynne Robinson is a masterful writer.

Gilead is set in 1956 and written in first person; a last letter from an aged man to his young son, outlining his story and the lessons he’s learnt along the way. It’s not entirely historical, and the letter quickly catches up to current times, mingling up-to-the-minute reactions about events that have transpired during the writing of the piece, with reflections on Ames’ childhood and life in the ministry.

But more than being the story of an individual and his ancestors, it’s also the story of a community; intertwined as they are. This is a novel set in small town America and it’s a rich tale. It has that authentic American novel quality reminiscent of Steinbeck or Hemingway, and it carries itself with the same authority. It is fresh, yet familiar. And though my own life and experience is miles away from the little town of 1950s Gilead, I felt strangely like I could picture it and sketch it out, so real and vivid were the descriptions.

Often that familiarity is conjured up by the use of stock characters that call to mind films, books and other depictions, relying on the collective memory to create the illusion of recognition. I don’t think that is the case here. Reverend Ames et al are not stock characters. Perhaps there is an element of ‘stock’ about them, but it’s a well-aged stock, flavoured by a collection of influences. Calvin, Barth and Feurbach have simmered away in Ames for many years, producing a deep and rich character, whose sole voice is a surprisingly compelling narrator.

Only once does Robinson break from the letter format to introduce another narrator, in the form of a short transcribed sermon from the Reverend’s grandfather. Drawing on other written documents in a piece like this is a common device, and one I often feel adds little to the narrative, except an increased word count. Robinson feels no need to do this, and instead ploughs all her effort into creating a thoroughly believable voice that is capable of sustaining interest for the whole 280 pages. This she does with aplomb, and in my opinion, the narrative voice never falters. Even when he writes portions that critique or correct his earlier work, it never feels clunky or contrived.

Perhaps what surprised me the most is that Reverend John Ames is a good man. Of course, the ‘Reverend hiding a thousand secrets’ is a well-established, dare I say tired literary cliche, which mercifully does not get wheeled out here. Ames has secrets, to be sure, but no more than anyone else. He is human. And he is a decent human. And as such, I was fearful that he would lose my interest, which probably says something quite awful about my own heart as the novel-reader, imagining that I can only find interest in the actions of a corrupt individual, and assuming that innocence would equate to boredom!

But the strange fact is that almost everyone in Gilead is a ‘good man’ and even the least good man has a good number of redeeming features and has to be assured that he is indeed ‘a good man’ in spite of his flaws. Gilead is a good story about a good community of good people, and the fact that Robinson can sustain all that goodness and keep the narrative compelling is a testament to her skill as an author. Some 24 years passed between the writing of her first novel and this, her second, and whilst I have no idea how many of those 24 years were occupied by considering Gilead, I could well imagine that she spent at least a decade getting to know the voice of Ames intimately. This is simply not the kind of novel a young author could have written; it has too much gravitas to it.

Gilead is a small town, which appears increasingly archaic to those who leave and return, where the trees are like embodied parables of its residents, ‘every time a tree gets to a decent size, the wind comes along and breaks it’ (p268). But the story’s content is not parochial in the negative sense. It wrestles with questions about war and pacifism, slavery, race and illegitimacy, and offers small town pastor answers to big questions, often in ways that are more profound than those answers concocted by big city pastors!

The religious themes are front and centre throughout the novel and at times the biblical allusions border on being overbearing. If you are unfamiliar with the Bible, certain quotations may feel oblique. But I found the assumption that the reader might understand the references strangely refreshing, since it authentically reflects the peculiarly American context in which a whole community is soaked in the customs and language of scripture to the point where it drops into common parlance, if not fully into practice or belief. Indeed, if Ames had taken time at every reference to spell it out more clearly for those unfamiliar with the Bible, it is less likely to have rung true.

Some of the sermonising is a little of its time – that is to say dated – though there are some genuinely interesting theological insights, for example the fact that the Ten Commandments follow the pattern of the Creation story, moving from God, to Word, to Day, to Man, to Woman, to Cain and Abel in the prohibition of murder, and so on (p158). I’ve never thought of it like that and will ponder that some more!

But I suppose the two main themes, or those that stood out most to me, we’re those of mystery and forgiveness.

Ames writes of mystery as only an elderly person can, in paragraphs such as this:

I don’t know why I should expect to have any idea of heaven. I could never have imagined this world if I hadn’t spent almost eight decades walking around in it. People talk about how wonderful the world seems to children, and that’s true enough. But children think they will grow into it and understand it, and I know very well that I will not, and would not if I had a dozen lives. That’s clearer to me every day. Each morning I’m like Adam waking up in Eden, amazed at the cleverness of my hands and at the brilliance pouring into my mind through my eyes – old hands, old eyes, old mind, a very diminished Adam altogether, and still it is just remarkable. (p76)

And I enjoyed the (albeit irritated) way that the aged Reverend replied to questions about predestination designed to trip him up. Having given some cagey and unsatisfying half answers, he retorts:

I’m just trying to find a slightly useful way of saying there are things I don’t understand. I’m not going to force some theory on a mystery and make foolishness of it, just because that is what people who talk about it normally do. (p173)

Despite living in a small town, Ames has a big vision of God’s creation that is refreshingly infused with gratitude, and he will allow nothing to quash it, least of all theological hot potatoes.

The second major theme is that of forgiveness. One might imagine that to be a theme of a final letter, as the author tries to put to bed old hurts and make peace at the end. For John Ames though, forgiveness is not a necessity discovered at the end of his life, but an ages long pursuit; an art-form forged over many years of practice.

He speaks about having learnt to forgive people for all manner of things, but still grapples with the complexity and personal cost of forgiveness, admitting once that he had failed to forgive a person since he wouldn’t know where to start (p164) and also writing about the difficulty of forgiving harm done to others:

Harm to you is not harm to me in the strict sense, and that is a great part of the problem. He could knock me down the stairs and I would have worked out the theology for forgiving him before I reached the bottom. But if he harmed you in the slightest way, I’m afraid theology would fail me. (p217)

What I found most interesting was that Revd. Ames was able to show such forgiveness and understanding to his brother Edward, whose atheism his father had great trouble forgiving, and yet found forgiveness so hard to muster up when it came to his namesake John Ames Boughton. In fact the parallels between Ames’ interaction with Edward and young Boughton were quite interesting; Feurbach being the unlikely connection between the three of them and his atheistic book a strange means of grace to two of the three characters.

This is the first of Marilynne Robinson’s novels that I have read, and it will certainly not be the last. I’m glad to see that she has revisited the town of Gilead in her novel Home and her forthcoming Lila. My gripe with many novels, plays and TV shows is often the lack of attention paid to narrative – scripts feel hackneyed and dialogue clichéd, while all the effort is poured into concept and description. That certainly cannot be said of Gilead. This is a rare gem, exuding gravitas; a delightful novel.