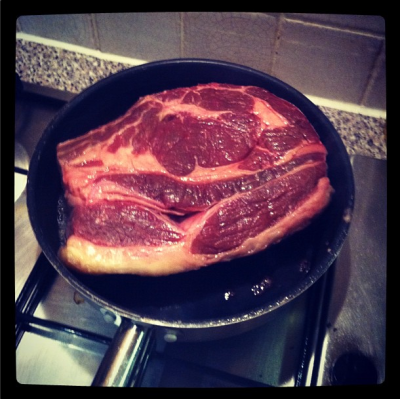 Christmas is a weird mixture; tonnes of amazing food, virtually none of which I’ve cooked. I’m not complaining, of course. I love having other people cook good food for me, and trips to both sets of parents ensures we never go hungry, with plenty of homemade delights constantly on hand! But I do miss cooking over the Christmas period, and so couldn’t wait to get back into the kitchen for New Year’s Eve.

We cooked spiced and baked chickpeas for pre-dinner nibbles, and a tarte tatin for dessert, followed by a selection of cheeses from Neal’s Yard Dairy. But the centrepiece of the meal was a slow roast rib of beef. The rib was from the Cow Club cow and survived a few months of freezing incredibly well, though it did take the best part of a day to defrost!

In order to get the best out of the meat we slow roasted it Heston style, following the recipe from his new book Heston Blumenthal at Home, which is surprisingly accessible! I’ve already made mental notes of a few recipes I can try without needing to invest in any heavy machinery.

You can see the recipe here, but in short we slow roasted the meat at 60°c for around 4 hours until the core temperature of the meat reached 55°c – a meat thermometer is essential! The result was fantastic; succulent medium-rare beef that was unbelievably soft. A million miles away from the dry leathery grey stuff that you so often get (and which I’ve so often made!). There was something very weird about having a piece of meat in an oven for a few hours and still being able to lift it out without the use of oven gloves. But the low heat and time spent waiting was well worth it. So little moisture escaped from the beef that there was next to nothing leaking into the roasting tray. The meat was amazingly juicy, and the fat was just breaking down and was like intensely flavoured jelly. Amazing! Time permitting, this will definitely be my cooking method of choice from now on.

The sauce was beautiful too; a punchy mixture of reduced beef stock (we used Heston’s stock from Waitrose, but only used 1kg, as I couldn’t bring myself to pay £12 for 2kg of stock which I would then reduce down to 500g!) shallots, butter, dijon mustard, tarragon, chives, white wine and parsley. I tried in vain to find some bone marrow… but alas, we had to make do without.

Sadly, I was so excited when it came to cut the beef that I forgot to photograph the final result, so you’ll have to make do with a picture of Heston’s and trust me that ours looked pretty much the same, except about a third of the size. We served it with Dauphinoise potatoes (oozing with gruyere), carrots, savoy cabbage and celeriac puree. Beautiful!