The best ice cream I’ve ever eaten, without a doubt, is from Nardulli on Clapham Common. Whenever I see a sign boasting ‘authentic italian gelato’ I’m usually pretty sceptical. It never comes close to the beautiful elasticity of Italian gelato and is often an over-sweet, over-firm ball of dairy. And the ball is the giveaway – gelato shouldn’t be ballable, but wet cement-like and needing to be smeared with a pallet knife.

I remember the first time we stumbled across the shop, they had a cassata ice cream, which was absolutely amazing! Five years and countless visits later, I’ve never seen cassata in there again. I asked the owner about it this summer and he laughed and said “we don’t make it any more – people just didn’t like it! You must be the only one!”

I had somewhat resigned myself to a cassata-free existence. But when I came across Dan Lepard’s recipe for a cassata cake in Short and Sweet, I knew I had to try it!

Cassata is a Sicilian sweet, comprised of sponge soaked in orange juice or marsala wine, and a mixture of ricotta cheese, mixed peel, vanilla and chocolate. Sometimes it’s square, sometimes round. Sometimes it’s coated in marzipan. I think it’s the ricotta that put people off at Nardulli, which I can understand. But it’s really not too cheesy at all; particularly when combined with the other strong flavours.

Since we were having a bunch of friends round to watch The Great British Bake Off final yesterday and needed to produce a table full of baked carbs, we decided to give it a go. It sad proudly alongside a platter of fresh fougasse, and various offerings brought by guests, including autumnal shortbread and a pumpkin and butterscotch tray bake. Dan Lepard calls it ‘the Sophia Loren’ of cakes and I suspect mine resembled Ms Loren in her latter years rather than her former! But nonetheless, I was generally pretty pleased by the result. The cake was moist and whilst delicate to cut, didn’t fall apart as I’d feared it would. We also followed Dan Lepard’s suggestion and made it a few days in advance, froze it, and assembled on the day, which worked perfectly.

You can find the recipe over at The Guardian, or reproduced below, or better still in Dan Lepard’s brilliant book Short and Sweet. We reduced the orange juice in the icing to 2 tbsp and increased the sugar by 15g and found it was still too loose, so you may want to adjust that. I’d also like to find a way of incorporating a little marsala wine into the recipe, as I consider that a traditional cassata ingredient and love the fortified flavour that it brings.

Photos at the bottom of the page; including a gratuitous pic of the fougasse. Forgive the grainy half-light, iPhone photography!

Butter two round 18cm layer cake tins and line with a disc of nonstick baking parchment. Preheat the oven to 180C/350F/gas mark 4. Cream the butter, caster sugar, eggs and zest until light and fluffy. Sift the flour, baking powder, cornflour and 75g of the icing sugar, and fold alternately with the milk into the butter mixture. Divide between the tins and smooth the top. Bake for 25 minutes, or until a skewer inserted comes out clean.

For the filling, lightly beat the ricotta with 100g icing sugar, chocolate, vanilla and mixed peel. Split each cake in half lengthways, spread a third of the cassata mixture on three of the cut layers and stack them on top of each other, finishing with the remaining cake top.

Beat the remaining 125g icing sugar with three to four tablespoon  of orange juice and let this drizzle down the top and sides of the cake. 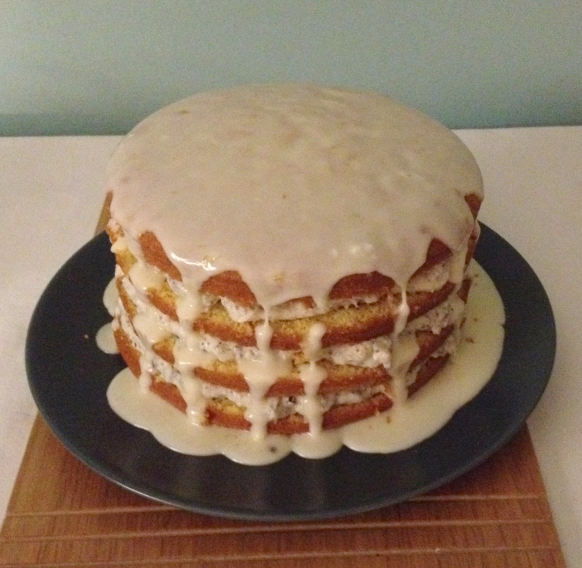 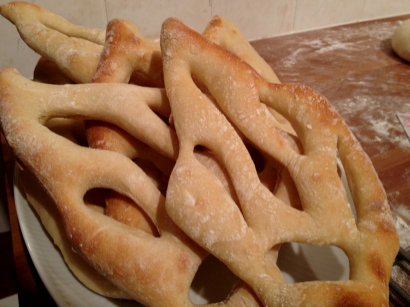